Guest post by ?uestlove: Music is STILL the weapon

Back in 2008, Ahmir Thompson aka ?uestlove of The Roots saw FELA! in New York and wrote about his experience. Read it here. 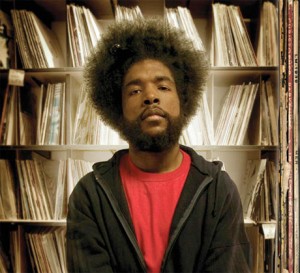 i wrote an email to all my industry pals after i saw the FELA! musical tonight.
i decided to share it with you.

ladies and gentlemen this is ahmir.
its is 5:58am in the morning and i just got home.

i witnessed a miracle tonight and it is a MUST you read this.
and when i say miracle you have to think this on the level of
sam jackson trying to convince john travolta in pulp fiction to acknowledge
the miracle that just occured (them escaping death by *this* much)
i didn’t escape death tonight. actually i believe i found life again.

having just returned from a 3 week eurasia run the LAST thing i expected
my web mistress Ginny to tell me the day before yesterday was “you HAVE to see the Fela play!”

if there is a thing or two that i have learned in my 16+ years as a professional, i’ve learned that broadway NEUTERS the
ISH outta the live experience.

many of you have either seen my band perform or know of our reputation.

ALOT of that comes from the fact plain and simple: we are the loudest band on earth.

there i said it. we cheat. most concert experiences (let’s take the glow in the dark tour. standing at the soundboard i saw that the loudest show of the 4 of the night [NERD] was somewhere in 118dbs.)

the Roots are more 131dbs (”low end” registers as noise even though its not the back to the future opening scene of the guitar amp turned up to 11 “are you nuts?!?!” variety)–but think of our concerts as being in your boys new ride with the best sound system and he FORCES you to hold your stomach while he cranks the volume and bass up to 10.

broadway shows are more like 70 dbs (i think the last “musical” i saw was Wicked–while entertaining in that “happy to be with my family” way i was amazed at how WIMPY and nutless the music hit me) —if you can hear the woman 5 rows ahead of you exhale then that is some underwhelming ish.

i have to put into perspective to what my resistant mindstate was when i had my “i’ll pass” ready for gin before she even got to say “and it’s so wonderful!!”

–she deaded all that by adding “AND THE ANTIBALAS ARE THE BAND!!!”

basically its like my gym coach asking jordan to come to the playground to give some tips
or emeril cooks dinner tonight in your crib
or spike jonze makes home movies for you.

in other words…next to the dap kings, the antibalas are the 2nd most important retro/revision band working today. the scrutiny and standard they uphold in creating AUTHENTIC afrobeat music can only impress the music snob in me. they have the baton when it comes to carrying on fela’s torch.

yes even more than fela’s two sons who record today.

—i was NOT prepared at all for this experience.

from a sonic view:

a LOUD kick you in the ass standpoint? and no member of the roots payroll is not on the soundboards? wow.
this is the first musical that has concert standards in making sure that the music WHUPS THAT ASS.

from a “to the letter” view:

they left NO stone unturned. i am that guy that sits in the audience and dissects EVERY nilc and crannie. i swear it was killing me that these funky white boys were doing something i saw no group of black musicians do in 30 years: gel.

(now granted i don’t wanna ruffle no feathers (this email is going out to about 200 musicians, actors, writers, bandleaders, moguls, agents, managers, cats on they yacht in france, and beatmakers in their college dorms, activists, hustlers, wanna be’s, veterans and newbies)—but how black people lost their “soul” in 2008 is the biggest rubicon i’ll never figure out. i know the first decade of the new mill was the age of irony, but black musicians overplaying and showboating while white cats find their groove will FOREVER baffle me)

it hit me from a political view:

but man. the way they tied his run ins with the government and army and police and tied it to america (sean bell, diallo, king) REALLY put it into an amazing perspective.

it hit me from a spiritual view:

it hit me from a creative view:

i HATE when music biopics won’t show the creative process. its like the snob engineer in me wants to know how he incorporated “that sound” not just “oh he had 70 wives and went to jail alot”—he broke it down like we were 8 years old from taking from calypso to taking from james brown to taking from king and x—the play dissected the VERY elements at why Fela’s music was so LETHAL.

man….i swear.
this is the most “uncut funk” production EVER.

because i wasn’t alive during the period of malcolm x and jake lamotta i can only go on “wow it was like seeing him on the screen” as spike and marty did a great job (you did spike….)

but this play is made for ALL you purists that HATE when they get references wrong in the music (hello Dreamgirl musicians! why are you slapping funk bass on a 60’s number?) or when the engineering is messed up (EVERY period biopic effs this part up bigtime and for all you directors and movie producers and agents reading this GABRIEL ROTH is the ONLY cat to capture that sound (see the Winehouse album)

its uncut.
its true to the vision.
its amazing!

there is no option. i expect death to be the only reason why you did NOT see this production.

it opens next week officially. playing to the broadway gatekeepers and the “old guard” if this can make it past those fogy traditionalists then i done seen everything in 2008.—i mean we about to have a black president—so ANYTHING can go on.

thus far the only “cool factor” people that have seen this production is me and ornette coleman. (and ladybug mecca….)

they basically wanted me to mouth piece this because this is going to be a HARD sell.

but they had me at hello.

this hit me like it was the musical version of Roots.

i felt all that cliche stuff when overexcited people experience a miracle the audience dance, we cried, we shouted, we gasped, we were amazed. we fell DEAD silent.

i want you people to see this play IMMMMMMMMMMEEEEEDDDDDDIIAAATLY.

there is a month left and tickets are leaving QUICKLY.

i want yall to forward this mail to ALL of your industry friends.

i want yall to buy tickets for kids that need to see the best connection to african music and the funk that propelled many of your childhoods.

this is NOT just some “oh ahmir is being dramatic shit”—

alan: this is your chance to see and experience a real life TAMI show moment
chuck: you can now see someone besides yourself be the sharp critic of corrupt government and be in the audience for once.
spike: the producers mos definitely wanna talk film
jurn: you can have an experience on par with denver—twice in a month!
wendy: real life chicken greasing!
tom, toure, brian, austin et al: the experience is like being there!
all you assistants on this CC: jedi mind trick your bosses to see this. i COMMAND THEE!
all you sidekics, tourmanagers, and the lefthands to the icons that have you on payroll: read this email to your bosses
you publicists?: blast this shit. this is the solar eclipse of creativity: a play 100% authentic in its reference points and creativity
and everyone in between….yes the “wow i wish i could see this” cats saying that right now.

get
off
your
ass
and
see
this
NOW!

-with love and respect.
i thank you for reading.
now go change someone’s life and pay it forward:

PS. in my excitement and it being 7am when i finished i neglected to give a shoutout to Bill T Jones: director and visionary. Job well done brother!